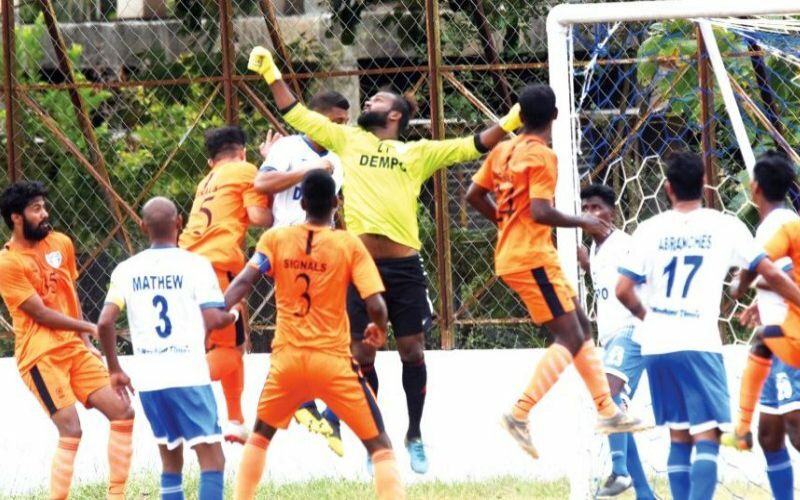 Dempo Sports Club scored in the dying minutes of extra time against Corps of Signals to get themselves back into winning ways of the Goa Football Association (GFA) Professional League match at 3 MTR, Rawanfond grounds, Navelim on Monday.

Substitute striker Beevan D’Mello’s left footed shot was enough to give the lads from Panjim the much-needed winning mindset which has eluded the team in the last two games.

The all important goal in favour of Dempo SC came when Dempo playmaker Pedro Gonsalves lofted a ball to Beevan, inside the rival box, who turned full circle and unleashed a left footed shot that crashed to the far corner of Corps of Signals nets, stunning the otherwise confident looking keeper Binu Purushothaman.

With this win, Dempo SC have now collected 23 points from eleven matches while Corps of Signals are on seven points with the same number of matches.

Stitching gorgeous moves throughout the first half, Dempo SC could have been up by at least five goals with Joaquim Abranches receiving as many as four clean chances – two midway into the first session and two in the add on time of three minutes (45+3). But on all counts, Joaquim Abranches fared poorly, either missing the target from close or sending haphazard shots which had no power or direction to the chagrin of his mates.

Dempo SC began the match with flowing moves with their defence as well as the midfield working in complete tandem with each other where Pedro impressed a great deal while Nickson Castanha demonstrated his class with his hard work and as he moved up and down the field, sending long passes and also defending well throughout.

Corps of Signals, however, came up with two great moves that could have helped them score goals in the 30th and 32nd minute of play. First, Solomn floated a great flag kick across the face of Dempo SC goal but to the surprise of everyone none of the Signals forwards rushed up to connect the ball in. This happened in the 30th minute and then two minutes later Dempo keeper Luis Barreto rescued the situation when a shot from Signals defender Romanse MS almost found the mark, but thanks to Dempo keeper Luis who punched the ball away to safety.

But scales began to tilt in Corps of Signals favour in the second half as the team came up with flourishing moves, time and again.

For the major part of the second half, Corps of Signals put up a lot of pressure on the Dempo SC team which appeared to crumble under pressure. Fortunately, their defence stood rock solid wherein Castanha and captain Mathew gave a good account of themselves.

However, Mathew was sent off towards the end of the 90 minutes of play following a second yellow card for the day. Dempo SC were thus reduced to ten men.

As the match looked heading towards a goalless draw, with both the teams unable to find the mark, Dempo SC found the match winner when Beevan D’Mello scored a great goal at the stroke of 90+5 minutes to end the winless drought.