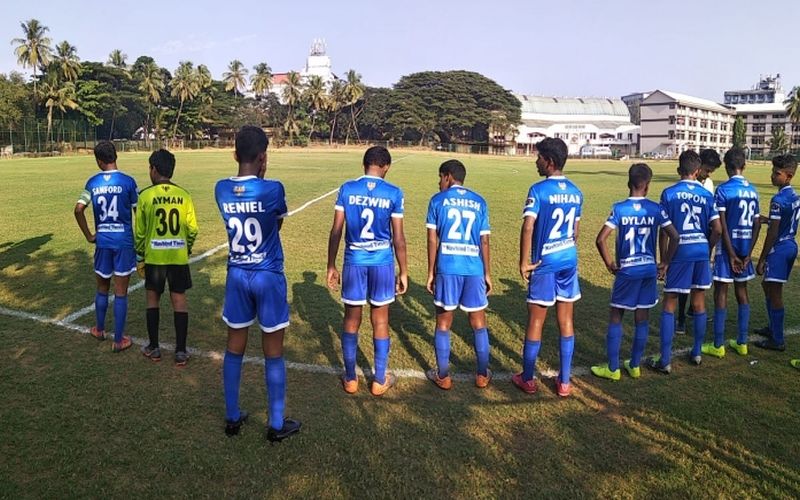 With 4 games gone by, the Hero Sub Junior League – Goa Group is already at the Half Way Stage of its conclusion, making it an ideal time to look back at the work and results, the boys have been able to conjure so far.

In the 4 games that have gone by the Champions of The GFA Under 14 League seem to have taken their winning momentum from the GFA league into the Sub Junior League, the boys, currently unbeaten in 12 games home and away in all competitions started their campaign in the Hero Sub Junior league on quite the bang! Putting a goal past Sporting Clube De Goa is no easy feat, however, the Pradip’s Young Eagles managed to put 8 past them, conceding just the solitary goal in a brilliant display of attacking football.

Against FC Goa and Churchill Brothers FC, the boys managed comfortable wins, beating them 3-1 and 4-0 respectively, Jairaj Patekar’s Hat trick was enough to ease the boys into a comfortable win against the red machines.

The only resistance the boys have felt in the campaign was against Salgaocar FC, whom at this stage of the tournament are the only team to take points from the eagles in what has been an unbeaten campaign so far.

The boys will kick start the second half of their campaign in the Hero Sub Junior Goa group by taking on FC Goa away from home on 8th January 2020 at Utorda Ground and can look to the fact that they have already played 3 of their 4 away fixtures, with the majority of the remaining fixtures set to take place at ELLA Ground, the boys can look to the Home Advantage aspect of things as a bonus to help them through to the next stage of the league.

Stand Out Numbers So Far:

12: The number of goals the Eagles have scored so far.

8: The number of Goals scored against Sporting Clube De Goa in a single game.

7: The number of different Goal Scorers to have their names of the score sheet.

2: The number of Clean Sheets the team has won so far.

2: The number of goals conceded so far this campaign.

3: The number of Goals Top scorer Jairaj Patekar has scored in the league.

Our Trailblazers have done it again! 🔥 After a

"I am overwhelmed with the continuous dedication t

With the Winner and Loser of the Title & Relegatio

Busy building up for Matchday 11 👊 All set for

Putting in the work before our final challenge of