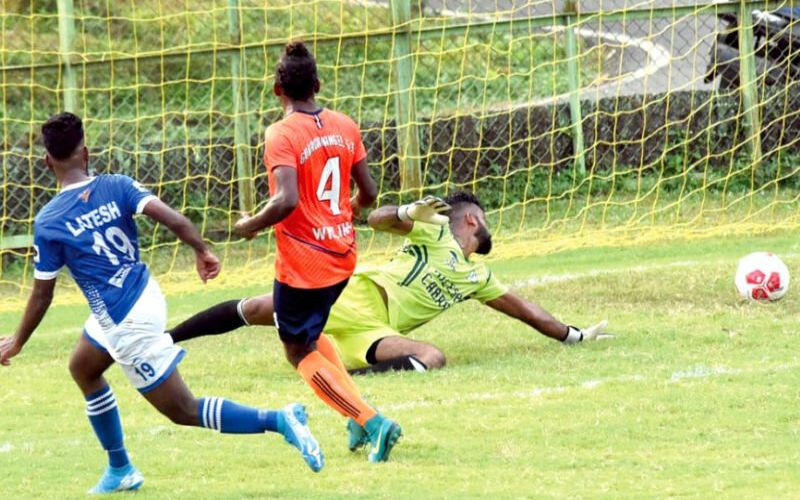 Dempo Sports Club juniors did not let the absence of the seniors be missed as they responded in style to beat Guardian Angel Sports Club 4-0 in the Goa football Association (GFA) Professional League at rosary ground, Navelim on Tuesday.

A brace by Latesh Mandrekar and Suraj Hadkonkar was enough to stop Guardian Angels flight.

Dempo SC shot into the lead in the 41st minute through striker Latesh Mandrekar who completed his brace in the 88th minute.

Substitute striker Suraj Hadkonkar, who was inducted into the second session, found the mark in the 57th and 85th minute.

Both teams looked to be playing on level terms with Dempo SC attacking in the very 1st minute through overlapping right back Nickson Castanha who sent a good pass to medio Yogesh Kadam who missed the opportunity, sending the ball off the mark from close distance with rival keeper Pratheesh Veettil at his mercy.

Guardian Angel SC had two great consecutive chances in the 2nd and 3rd minute of play. The easiest was in the second minute when Beneston Barretto dodged past a couple of defenders and sent the ball to Ghanian Bamba Musah whose smart tap narrowly missed the mark.

Thereafter, both the teams were seen trying hard to outwit each other with Dempo SC having a larger share of exchanges but unable to beat Guardian Angel SC keeper Prathees.

Dempo SC’s medio Pedro Gonsalves, who had a good game today, was in the thick of action on a couple of occasions and sent some glaring passes to U-20 striker Aman Govekar who could not find the mark.

After persistent efforts, Latesh Mandrekar gave Dempo SC the lead in the 41st minute when Rajat Harijan, the U-20 medio, made a great pass to him from the right flank and Latesh obliged with a stiff grounder to beat the Guardian Angel SC keeper.

After conceding the goal, Guardian Angel SC looked to be a punctured team and lost the zeal for a fight back. Their defense, as well as the midfield, failed to function in cohesion and once menacing striker Bamba Musah was replaced, it looked like they had thrown the towel in.

On the other hand, Dempo SC’s defense looked rock solid with new comer Fulgencio Cardozo proving to be an asset to the team, as he demonstrated a lot of confidence, playing a cool game and never allowing the rival strikers to manoeuvre freely inside the box.

Dempo SC keeper Luis Barreto, the other recruit was hardly tested and was never under pressure as the back four of the Dempo SC team never gave any space to Guardian Angel SC strikers.

The second session saw Dempo SC having a clear edge over their rivals and they appeared way superior in terms of ball possession and positional play. Guardian Angel SC were left defending their fort for most part of this half, during which time, the Dempo team scored three more goals.

Suraj made it 2-0 in favour of Dempo SC in the 57th minute after Aman Govekar passed the ball to him, sent the ball to the far corner of the nets with an angular effort.

Thereafter captain Veltio Cruz, who worked his way down the middle, made a forward pass to Suraj Hadkonkar who scored to put Dempo three goals up in the 85th minute.

Dempo SC was now all over the rival territory and made it 4-0 in their favour when Latesh Mandrekar scored again in the 88th minute.

Dempo SC had a number of chances in this half of play, particularly in the last quarter of the match and had the opportunities that came their way converted into goals, the score line would have been different.