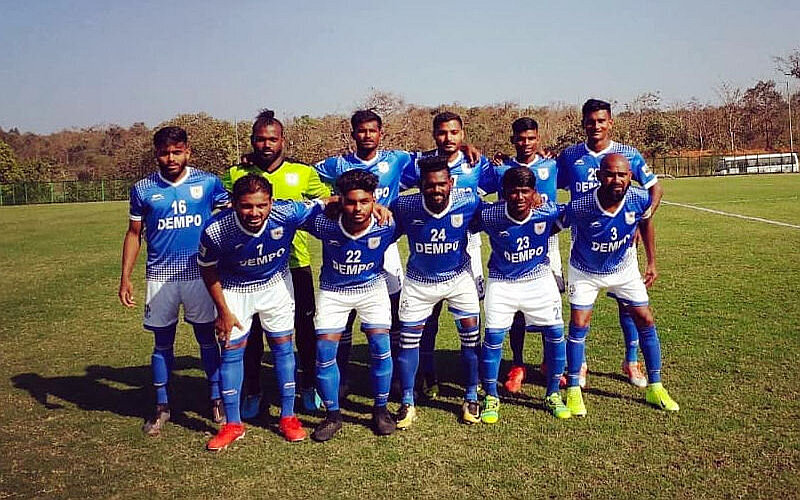 There was no score during the first half.

Both teams started cautiously with Vasco preferring to hold back and wait for the counter whilst the Dempo lads’ intent on striking but playing tentatively. Both teams got two free kicks in the first thirty minutes and both were purposeless.

However, the Dempo lads increased their tempo in the last quarter of the first session with their traditional ball possession and quick interchange of passes from one flank to the other.

Though Desmon Pereira, Rajat Harijan and to an extent Aman Govekar – did show ability to dictate the pace of the game all players shied from shooting at goal from 30 yards or more.

Despite dominating, it was Vasco SC that got the best chance to score in the closing stages of the first session when Suraj Mondal fed Anil Gaonkar whose shot was well blocked by Dempo SC keeper Luis Barreto.

Vasco SC started the second half from where they left in the first and Micky Vaz looped the ball into the Dempo goal – playing against the glare of the sun – only for Luis to collect neatly.

Dempo SC came with a different attitude in the second session and this was catalysed by the two substitutions Dempo coach Samir Naik made. First he brought in Suraj Hadkonkar for Aman Govekar and later Joaquim Abranches in place of Rajat Harijan and the changes gave a different hue to the Dempo attack.

Dempo reacted and in the 54th minute Beevan found Suraj with a nice pass which the latter blasted into goal from close only for Vasco keeper Sanju Thapa to signal his presence below the horizontal.

The save did not demoralise the Dempo lads and in the very next minute they started the scoring, though this time Vasco SC defender Warren Perreira scored an own goal – he tapped in a cross that Desmon had directed towards Joaquim Abranches – to the relief of the Dempo fans.

The goal stirred the Dempo lads and stung the Vasco lads who started relying solely on Suraj Mondal to get the equaliser and the last named kept indicating that his fitness was playing against him.

Dempo SC had two clear chances to consolidate their position but on both occasions Vasco keeper Sanju proved to be a hard nut to crack. First, in the 65th minute Joaquim’s powerful shot was parried for a corner and later a swirling kick by Alber was also diverted out of play.

Dempo’s efforts paid off in the 77th minute when Suraj controlled a through pass and worked Sanju on the wrong way before neatly placing his shot for the evening’s second goal.

The second goal signalled an end to Vasco’s resistance and Dempo capitalised on it and were rewarded with the third goal in the 79th minute when Joaquim was intelligently fed through by Beevan and the last nameds coolly slotted the ball past Sanju.

Dempo could have added another goal had it not been for an acrobatic save by Vasco keeper in the last minutes of the game.