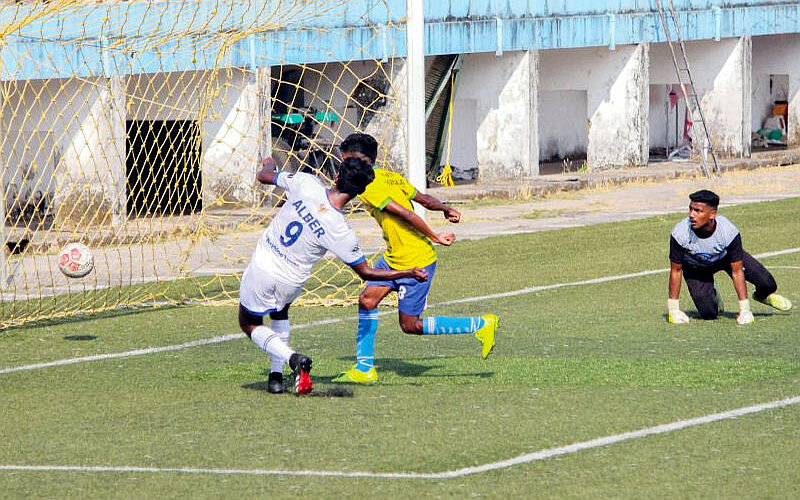 Dempo Sports Club kept taking the lead and Panjim Footballers kept fighting back till the seventh goal proved to be the decider and the former returned home with three points and a chance of winning the Goa Football Association (GFA) Professional League at Duler stadium on Tuesday.

Dempo SC played with a combination of youth and experience and that gave them an edge over rivals Panjim Footballers who banked on raw feet that did not give up easily and that explained how goal kept being scored from the 7th minute till the 88th minute.

Dempo SC started with Beevan D’Mello up front instead of Joaquim Abranches and the former started the scoring in the 7th minute when he capitalised on a Panjim’s defensive lapse, took a few steps forward and on finding the right angle let in a shot that brooked no response from Panjim Footballers goalkeeper Preston Rego.

Panjim Footballers dominated through their right flank, capitalising on their speed and leaving, many a times, Dempo captain Mathew Gonsalves behind and the team’s defence vulnerable. On one such occasion, in the 14th minute, Lloyd Cardozo after having beaten Mathew on speed could not control the ball with just Dempo Sc keeper Luis Barreto to beat.

Six minutes later, Panjim Footballers attacked again from the right flank but this time Xavier Rebello’s lob was met by Lloyd whose header was neatly collected by Luis.

Panjim Footballers kept pressing for an equaliser while Dempo SC preferred to strike through counter attacks and the closest the winners came to increasing their margin was in the 25th minute when Beevan played Desmon inside the box only for the latter to see his shot – which lacked power but curled– neatly saved by Preston.

Panjim Footballers managed to break the Dempo SC citadel in the 33rd minute when Chandan Gawas ran on the right and took a shot which was punched away by Luis to land at the feet of Krishna Gawas for the first equaliser of the evening.

It took Dempo five minutes to gain the lead again when Nixon Castanha, who had another good evening, ran up his right flank and on entering the Panjim Footballers box crossed the ball to Alber who headed home powerfully to leave his team going for the lemon break with a goal’s cushion, (2-1).

Panjim Footballers owe a lot to their fightback spirit to Chandan who tore the Dempo defence on the right with his speedy runs and crosses into the box. In the last seconds of the first half, Chandan ran from the top of his own half and on reaching the goal line sent in a cross that beat the entire Dempo SC defence and found his own colleagues wanting.

Panjim Footballers required five minutes of the second half to draw level when in the 50th minute Chandan got past Mathew through sheer speed and pushed the ball in past a hapless Luis, (2-2).

The goal instilled confidence in the Panjim lads and the boys who seemed to prefer to play second fiddle almost took the lead in the 63rd minute when substitute Lokesh Talwar found Krishna with a nice pass, but his attempt hit the side bar and cleared for a corner.

Dempo SC took the lead again in the 69th minute through Suraj Hadkonkar whose nicely taken free kick beat the Panjim defence and goalkeeper hands down, (3-2). However, Panjim Footballers hit back in the very next move, in the next minute, when a corner by them floated towards Lloyd whose thundering shot from the edge of the box surprised the Dempo lads, (3-3). Dempo SC kept pressing hard for the winner and Panjim Footballers opted to play ball and when it appeared that the game would end with both teams splitting points, Alber sprang up a surprise in the 88th minute by heading in the winner that emanated from a free kick taken by Suraj and slotted towards him by Shallum for the last goal of the evening, (4-3).