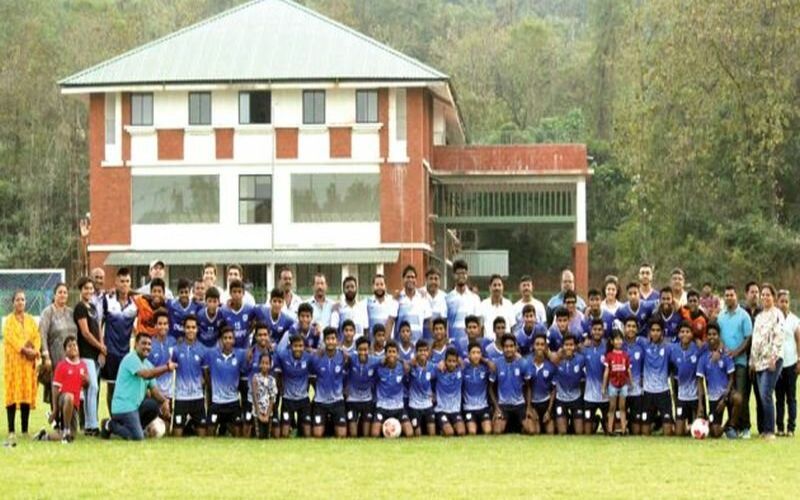 Dempo Sports Club colts had a few late hiccups before defeating Salgaocar FC 3-2 and clinching the Goa football Association (GFA) U-16 title, with an unbeaten record, as the Dwayne Bravo song ‘I am the champion’ wafted through the Dempo SC Academy ground at Ella in Old Goa on Sunday.

Dempo finished the 12-team league with 36 points whilst Salgaocar finished second with 26 points. FC Goa, with four games in hand, are third.

The Dempo lads started authoritatively in their last league game and took the lead as early as the 14th minute when Shameek Vaz delicately finished a precise cross by Sherwin Abranches from the right. Thereafter, they kept Salgaocar on the back foot.

The first session belonged to Dempo SC and Salgaocar goalkeeper Bob Raj. The Dempo lads, especially Sairon Alburqueque and Arnold Oliveira impressed with their neat positioning and nice flicks at the top of the box. They managed to beat the Salgaocar defence on a number of occasions but getting past Bob turned out to be a problem.

Salgaocar FC tried – once in a while – through Sidney Lucas, to get past the Dempo defenders but in vain and as such both teams separated for the lemon break with Dempo leading by a solitary goal.

Dempo, and not Salgaocar, started the second session with added zeal and in a space of four minutes scored two more goals. Shameek Vaz registered his brace two minutes into the second half when he capitalised on a defensive lapse to nod home his team’s second goal.

Two minutes later, it was the turn of Clarence Fernandes to dampen the enthusiasm of his rivals when he connected Arnold Oliveira’s cross.

Down by three goals and it looked like the lads from Vasco had thrown in the towel with Dempo keeping up their attacks and on two occasions Shameek had the mortification of seeing his set piece tries bounce off the horizontal.

And when it looked like the game was going to end up Dempo’s way, Beckham Dias of Salgaocar put life into the contest with a gem of a free kick that left the entire Dempo defence and the parents gathered to support their kids, speechless. Beckham’s fierce free kick from top of the box zoomed into the goal with the Dempo defenders and goalkeeper motionless.

The goal brought some life into the game and the Salgaocar lads got a glimpse of a late equaliser when they were awarded a penalty in the 88th minute which Jordan Borges converted effortlessly.

The visitors pressed hard for the equaliser but it was not to be as Dempo scripted their 24th win.

“This is the effort of the hard work put in by the boys right from July. That discipline has come in because of how we were mentored by our former TC Katz Naidoo. He is not here today but he must be smiling from above. This hard work put in by all is dedicated to him,” stated Dempo SC U-16 coach Remus Gomes.

“It was a close contest. We lost two games and both to Dempo. They deserved to win and we hope to have an eventful AIFF contest soon,” stated Salgaocar FC coach Cajetan Fernandes.